A Jeepney Ride to Tunisia

The focus of this chapter is the challenges and approaches to organizing workers in Canada under the Temporary Foreign Workers Program (TFWP). The  Immigrant Workers Centre (IWC) in Montreal has been working with groups of workers in this program for several years and has learned many valuable lessons. The IWC has defined working with workers in the TFWP as a priority. Over the last few years, through different contacts, the IWC has met with and supported workers in many types of employment and in different regions and cities of Quebec. The groups we will discuss are those in the high and low-skills categories. The defence of workers in this program is complex because of the different categories- high and low-skill, with implications for the possibility of permanent status, the size of the group of workers- individual jobs as cooks or collective work as landscapers, their invisibility and distance from centres where there are stronger community organizations and unions. Ideally the building of associations of workers with their own leadership, and supportive allies such as unions and community organizations is the goal including the capacity of workers to represent themselves and defend their collective interests against employers and the state, but we are a long way from that. The vulnerability and the isolation of workers makes organizing difficult; however, there are steps and processes that will be described here. 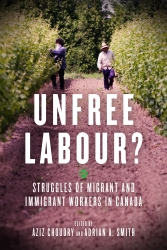